When you read my food reviews, you join me on a very personal journey from garden, to the kitchen and then the plate. Cooking has been a passion of mine for over 30 years. I am not just a gardener and food lover, I am also a professional cook that brings smiles to thousands of people each year.

This is what I love best about Perth: hidden gems like Julio’s.

The building has come a long way since completion in 1902. It was once was the proud residential home of the Walsh family, an iconic red brick corner site in West Perth that sides the intersection of Hay Street and Ventnor Avenue. It was an outstanding location in its prime and it still is today. A whisper away from Subiaco’s fashion district or a downhill ride to the city centre.

Today, the Walsh’s have long moved on and in their place stands the new Sage Hotel after a full renovation. The name Julio’s stays with the bar and restaurant, thanks to the vision of new owners, Adam Zorzi and Rod Hamersley.

The restoration project was mammoth. A story of contrasts. Old and new. A faithful nod to heritage, yet in keeping with a traveler’s modern needs. The exposed white-washed brickwork is rough, in stark contrast to the smooth, polished floors and sculptured fireplaces. Wooden tables add to the rustic feel, as do the heavy overhead beams. You could be in an old English country home with its large sash windows, were it not for the modern bar with hanging martini and wine glasses. And its Italian cuisine. Another contrast.

Julio’s is a truly enticing place where the affable Executive Chef Simone Ariano works his magic which borders on art. My breakfast was an experience and not just a meal. It kicked off with the Chef’s Best Muesli served in a small square topped bowl.  The presentation was stunning, a homemade granola infused with coconut, almonds, walnuts, a dollop of yoghurt, a sliver of Julio’s embossed chocolate, a sprinkling of fresh blueberries and topped with a carefully placed strawberry. Colours and flavours were intense. The rewarding taste amazing.

I felt a bit like Bruce Wayne (a.k.a. Batman) when my phone rang and the filtered message went out like this: “Solo Pasta. Mount Lawley. 3pm.”

I love surprises and this was not one I expected but it did make me go WTF!

Solo Pasta is the brain-child of Chef Gil Lewkowicz whose worldwide CV is not just interesting, it is notable. I had been primed through the grapevine that something was in the offing. I’d been drip fed tit-bits: pasta by the metre; new look; not Italian; international; a medley of flavours; freshly made. But it never dawned on me how brilliant his concept was until I was half way through my meal.

I’d ordered the tender chicken lime and coconut curry with coriander, peanut and caramelised chili without a second thought, because it had “Thai” emblazoned all over it. I was on autopilot. I love Thai food. But when my meal arrived, it was devoid of the usual culprits rice noodles. In fact, there was nothing very “Thai” about it at all on the outside. The whole meal was encapsulated in a plate of pappardelle pasta served by the metre, not a noodle or rice grain in sight.And that was the point.

Solo Pasta is all about flavours intertwined with freshly made pappardelle pasta. I could read the signature undertows of kaffir lime on the nose and tongue, the taste of coconut cream (not too overpowering) and appreciate the braised tender chicken because that’s what I do at home in my kitchen.

It was an instant winner.

Pasta is not owned by the Italians. It is owned by every household in the world: Italian, French, English, Chinese, Arab, Israeli, Spanish, Portuguese and keep going. What we do with pasta on our own patch is what Solo Pasta has tapped into and made Jamie Oliver millions. It is called comfort food, only this time, by the metre.

Solo Pasta is Gil in his element, unconstrained and homely. A massive homage to comfort food that has deservedly sunk so many pseudo celebrity chefs and the trawl of writers that kow-towed to them. What Gil gives you is naked and raw. There are no pretensions of grandeur. What he trots out is what we want. For a meal, our friends and family.

Solo Pasta delivers 30 stunning meals, every one of which is made from pappardelle, flat ribboned pasta that is either a classic, beetroot, or spinach consistency. You can pick what kind of pasta base you want: tomato, creamy or olive oil/jus based. And you can pick the length (I recommend the standard 4 metres…don’t let your eyes, overrule your tummy!) although I did go for the amazing Asian cabbage salad as a buffer too.

Buried in that huge selection is pretty much anything you could ever want from pork and kale meatballs, to basil pesto, Norwegian smoked salmon, chilli mussels and the old kiddie favourite, like my favourite classic, spaghetti Bolognese.

There is nothing simple about Solo Pasta. Every pappardelle strip is hand-rolled fresh each day. I was privileged to be there as the paint was drying on the old Monte Fiore site and the “new look” of Solo Pasta evolving. It was young and invigorating. I could see the Mount Lawley set warming to the place before the paint had dried. This was the “wine bar” I would have died for when I was 20-something. Trendy, happening and above all else, a place to hang out. With great affordable food. But if there was one thing I wished the genie could have brought me, apart from my youth again, was a take away tub and a fork. I could see myself traipsing down Beaufort Street with the best fix in town. 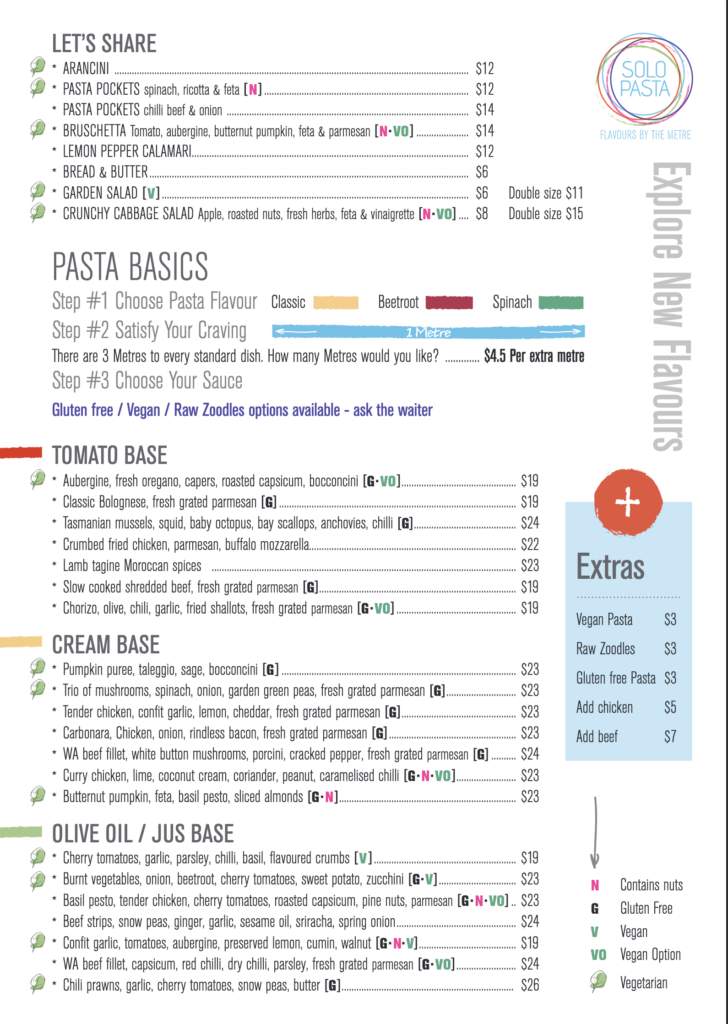 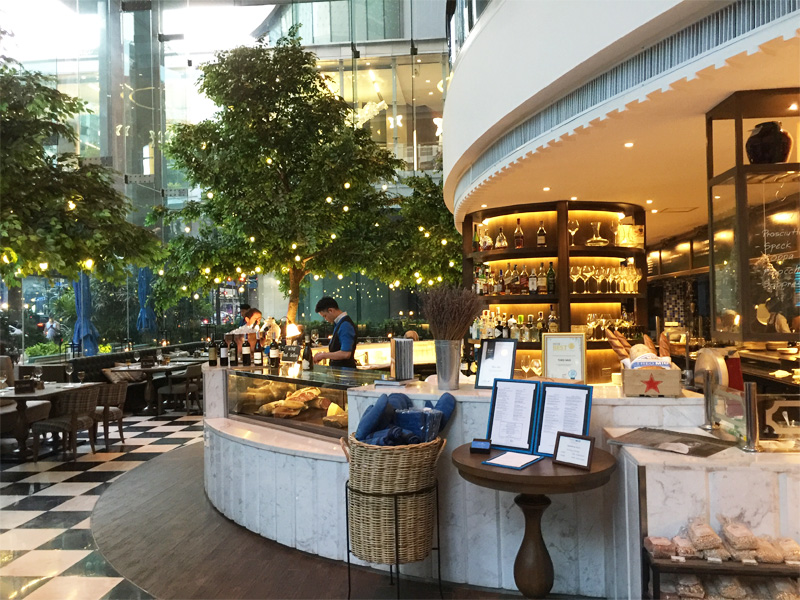 Here’s a little secret and a massive dichotomy: I’m not a big fan of eating in hotels. But I do like to stay in them (a lot). I just feel that eating in a hotel is somewhat lazy and unimaginative when there is so much more choice out there. If you’re going to visit a country, then do just that – visit it.

Don’t hibernate in your hotel!

I’m more of an explorer. I like to get out and “do as the Romans do in Rome”. To hunt down where the locals hang. But this trip has completely re-written my text book on travel dining logic, particularly in Bangkok and it begins squarely with Theo Mio.

Theo Mio has become my favourite restaurant in Bangkok which is like a slap in the face to my love of Thai food. I didn’t go to Bangkok to eat Italian, but I did. Twice. At the same joint.

Theo Mio is the brain child of award winning chef Theo Randall. It is a modern street-front Italian kitchen located on the ground floor of the Intercontinental Bangkok which straddles the Phloen Road and what would normally be a rather uninspiring view of concrete and people; there are lots of both. Yet Theo Mio breathes life into this corner with its bold glass frontage and external terrace edged with carefully planted shrubs and topiary trees. Turquoise umbrellas and blue padded chairs add colour to this little garden enclave which is mirrored inside by gigantic ficus trees in dark ceramic planters. The black and white mezzanine floor adds even more authenticity to the Italian kitchen concept, along with the baskets and bread racks, the dangling salami meat and the blackboard menus.

The feel is definitely bright and airy. Quite intimate with its open-kitchen plan and seating choices. I loved the studded bench seating that ran uninterrupted around the windows as well as the little touches of throw cushions. Even the limited number of bar stools lent themselves to the cucina experience as you gawped at the busy chefs whipping fresh produce into action. 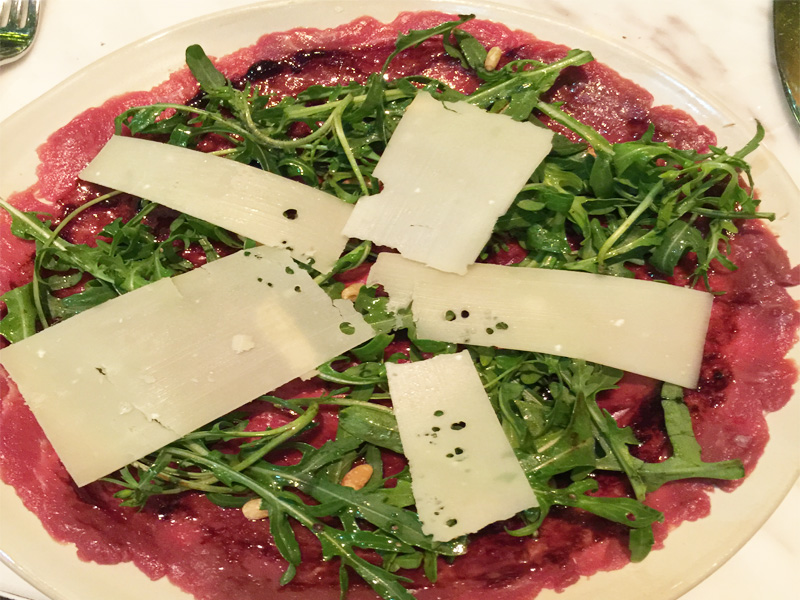 The Carpaccio di Manzo was a game winner with its thinly sliced beef filet, toasted pine nuts, wild rocket and large parmesan shavings. It was supposed to come with aged balsamic vinegar and Puglian olive oil but after a quick rummage around the rocket leaves I was compelled to call for some (or extra).

On two occasions, I ordered the gorgeous traditional Ligurian Trofie al Pesto Genovese with fresh pesto, potato and green beans. And I stole mouthfuls of the Risotto con Gamberoni e Zucchini (prawn risotto) and the Pappardelle con Ragu di Guancia (ribbon pasta with slow cooked wagu beef cheeks) from my paying guests. Thumbs up all around. 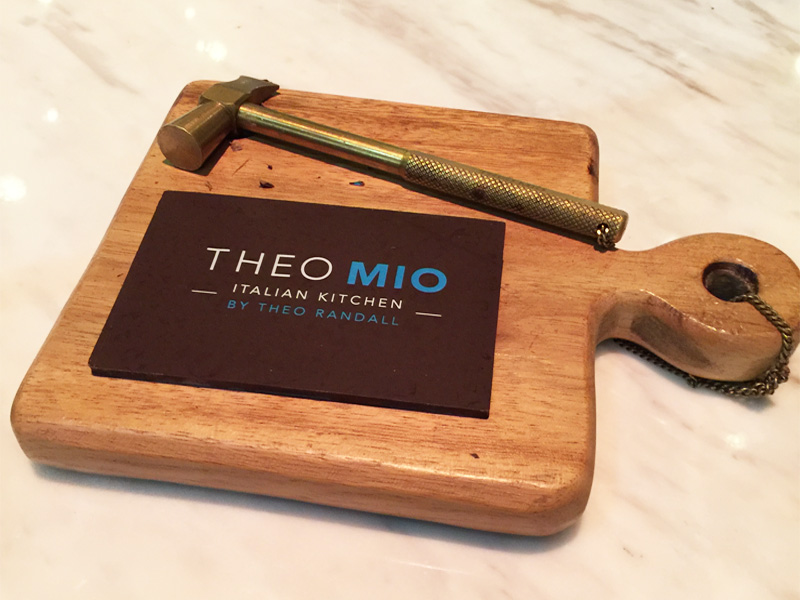 When coffee time beckoned, a thin slab of chocolate accompanied it, served on a chopping board with a bronze hammer to smash it. Clever.  Memorable.

The wine choice was excellent and the atmosphere lively and I have to say, the service was brilliant. I barely had to look parched before my glass was topped up.

From antipasti to pizza, the choice is spot on. Prices are as expected for a hotel but nothing outrageous either. Pretty much what’s you’d expect to pay for good Italian fare.