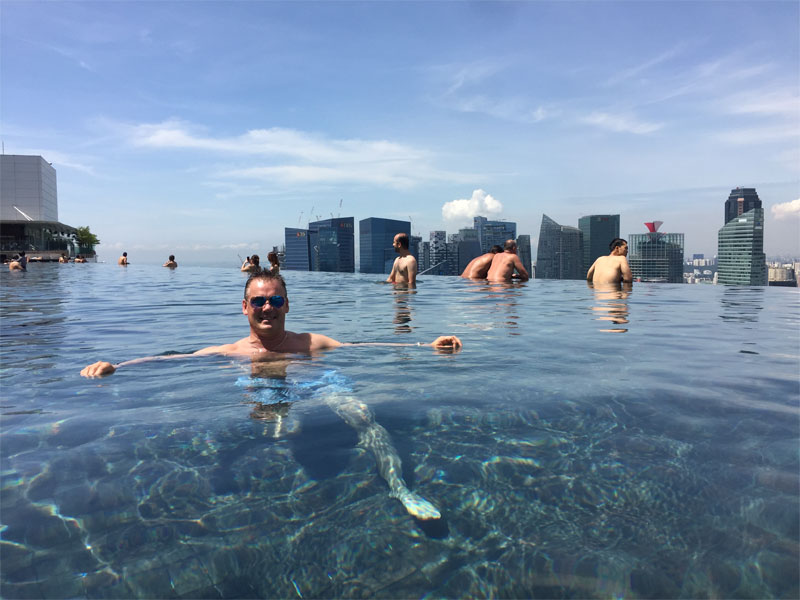 I had big expectations going to the Marina Bay Sands hotel in Singapore, after all, it does stand out from the crowd as one of the true icons of the Singapore skyline. And that is where (unfortunately) the good news ends. I had already been to the Pan Pacific and the Raffles Hotel. And if these two forebears were a litmus test, then the Marina Bay Sands crashed and burned on impact. It was a slap-in-the-face to my understanding of customer service and it began as soon as I entered the giant foyer.

In fairness to the Marina Bay Sands, this venue is one giant throng of heaving flesh…everywhere. There is zero room for the personal touch, as almost everyone and everything scurries from taxi to elevator dragging suitcases on un-oiled, squeaky wheels. Yet the whole place unquestionably runs like a well-greased machine, best suited to the convention fraternity, or the Willy Wonka factory. Bodies are designed to be cranked out, farmed into bedrooms and then harvested like a cash crop.

I too was a victim.

I felt like a number. An insignificant one. The whole of my stay. 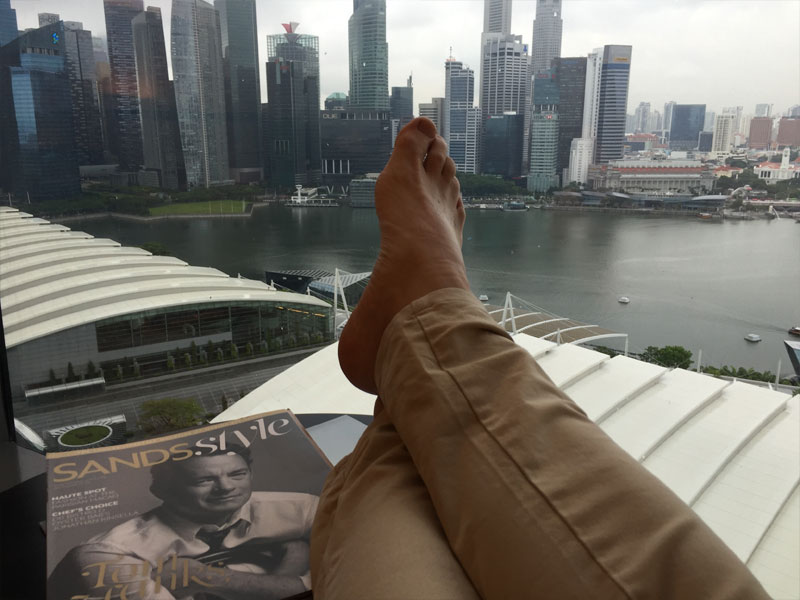 Peace reigned and a sense of normality and quietness returned when I entered my room, which though small, was diametrically pricey and fabulous. I was lucky enough to have a floor-to-ceiling view overlooking the CBD, from where I could watch the sun go up (and down) with the shimmer of boat wakes amusing me as they shuttled across the bay drawing white lines. I kicked off my shoes, placed my outstretched feet across the glass coffee table, photographed them like all women do on beaches, and then sucked up the mesmerising urban scenery before me.

It was a perfect moment of reflection from 40 floors up.

The bed was snug and comfortable; a tiny writing desk provided a compact work area for my laptop.  It was pretty much a room for short term convenience and probably designed as such. The bathroom was likewise modern with neutral tones and marble finishes. Nothing too lavish or over the top. 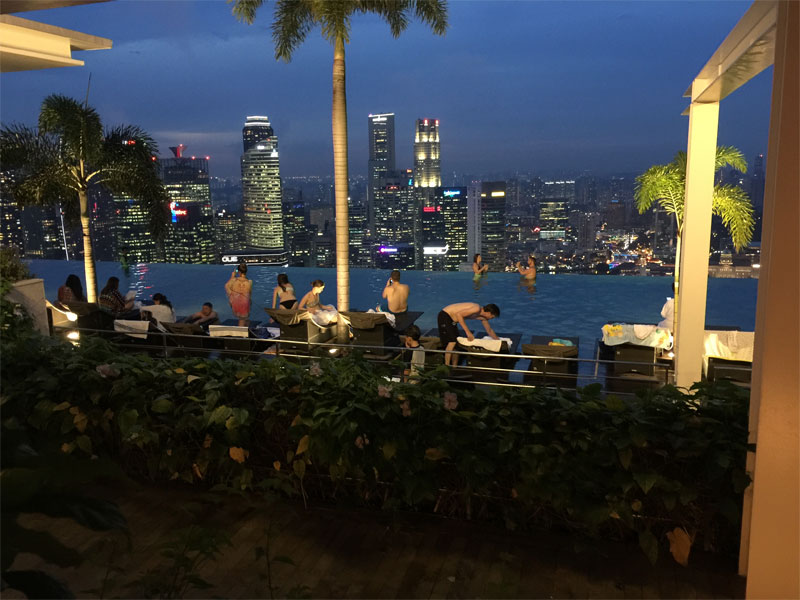 I’m not a big fan of public swimming pools. For obvious reasons, I refer to them as “pee soup” since most kids (and probably adults) have a penchant for relieving themselves in the water.

As a consequence, I am a marred man.

I have experienced two unforgettable episodes in my life when I have ended up with an ear infection from swimming in floating guano. Once was in Nassau, the Bahamas, when (by the way) both my ears were squeezed completely closed by exceptionally painful swellings (abscesses) They took five days to burst. The other (second torture) was at Cap d’Antibes in the South of France. That episode I will never forget as long as I live. I was eight years old.

It was an emergency, or as the French would have said, “Un urgence“. And now that I’m older, and wiser, I’ve just figured out that the english stole the word “emergency” from the French for their inability to say “urgency!”

At that time I didn’t care. I was reeling in pain.

Le docteur appeared and diagnosed my agony with my first ever prescribed suppository. As you can imagine, that image is still etched into the interior of my scalp.

I remember having to clutch my ankles in the shower as my mother inserted a conically shaped, greased pill into my rectum. It was an inordinately uncomfortably “cure” and totally alien to my 8-year-old understanding of modern medicine and “oh la la!”

I remember asking my mum, “If I have an ear ache, why do you have to shove something up my bum?” 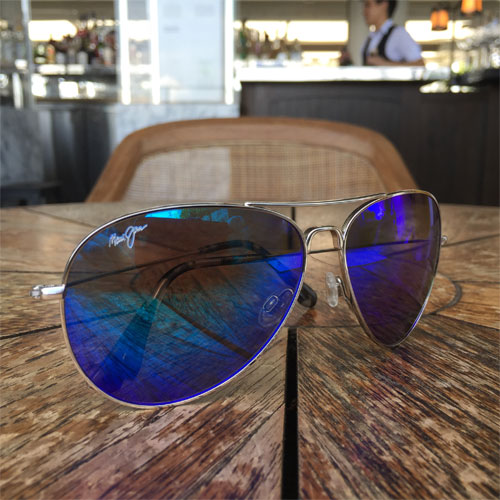 The Marina Bay Sands is famous for its rooftop infinity pool and despite my reservations of climbing into the water, I was resigned to having a swim there. I wanted to tick another square on my ill-informed bucket list. To not do so, would be like going to Paris for the first time and avoiding the Eiffel Tower! But getting there is the fun part. You simply follow the trail of (mostly Asian tourists), bedecked in white bathrobes as they squeeze into the elevator. Everyone is quiet. No one speaks. It is awkward. Like they’ve just had sex. Or are about to.

I so wanted to break the ice and ask ,“So-where-are-you-going-today” but I didn’t have the time to explain such a dumb question.

The main part of the pool is for hotel guests only and you can’t access it unless you have an electronic key card with you or a Colt 45. This is rigorously checked by officious-looking ladies in white polo shirts that are clearly taught never to smile which is why a Colt 45 would be so much fun.

The infinity pool is stunning and every guest in the hotel knows it, which is why you’ll never be there alone to savour the moment. It’s not a very spiritual or romantic place to be at, especially when you are surrounded by a million selfie sticks that look like snorkels. But the view is stunning and the water comfortingly warm (I’m not referring to urine). Not wishing to be left out, even I waded to the pool’s edge with my (cough) neon green selfie stick. The photo outcome was another story. I looked like a blubbery, glutenous mass of body fat bobbing in the water before being strained through muslin cloth.

I think that holiday snap will stay in the drawer forever! 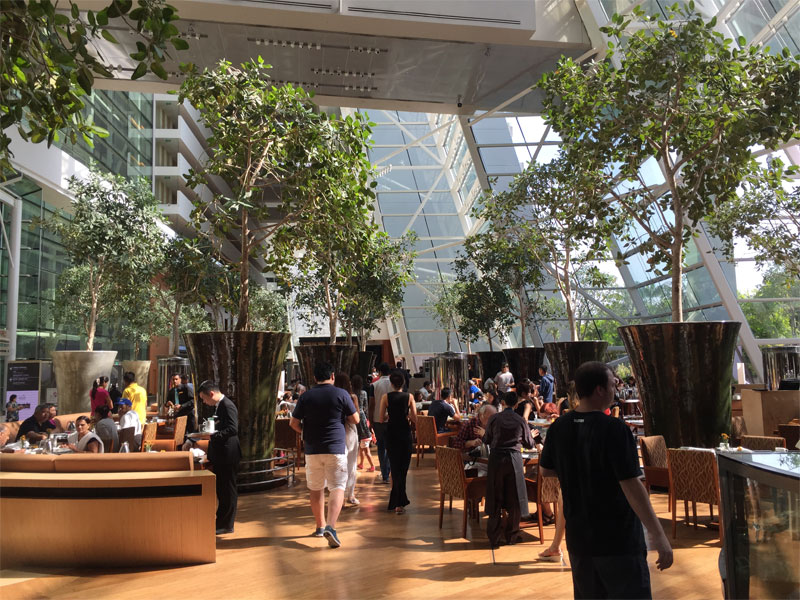 Everything at the Marina Bay Sands is big. Giant flower pots with towering ficus trees. Long, snaking check-out lines. Three towers and three elevators to suit. A jumbo Christmas tree. A large invoice. With the double-whammy VAT added after the fact.

The shops within the Marina Bay Sands are world class with barely a fashion house or label missing from between the lines of Gucci and Cartier. This was very impressive. Immensely clean, totally modern and fully undercover. It is a shopper’s paradise and not small either.

And if gambling is your bent, then there is a casino on the lower lever. I would have gone in for a quick look, but they have a strict policy in Singapore that you must to carry your passport to enter a casino. I didn’t. So I kept on walking.

The Marina Bay Sands Hotel Review Singapore are the sole opinon of me, The Walking Critic.

What you can read next 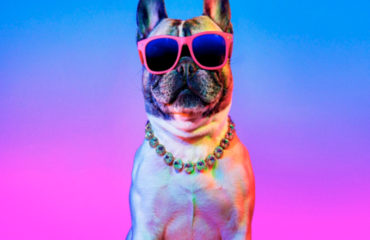 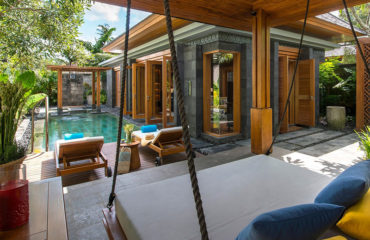 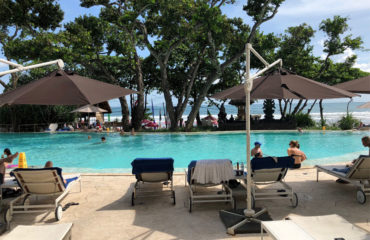