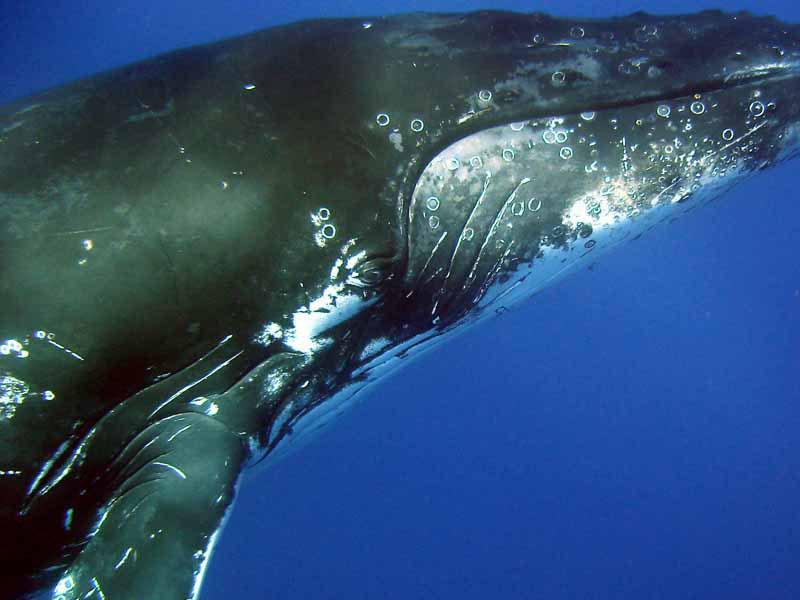 It felt like eight freight trains were riding towards me on a phosphorous crescent and I had no idea where to go but into the water. Eight of us sat suited and masked-up, hugging our knees.   Silent.   All of a sudden, the boat veered sharply to the left.  My heart beat quickened. I nervously rechecked my gear. I was seconds away from being thrust into the fore of something so powerful that my own humanity was dwarfed into powerless insignificance.   And then the engine tone dipped and the thud-thud died.   For an eternity, I heard air… if that was possible.   A horn sounded.   The watching was over. The time was now. I had reached the point of no return.   I was confronting the unknown. Fear of water, fear of sharks; my own insecurities.   The sound was deafening: “Go, go, go!”   As I pushed out from the marlin board, into the big blue, I had no time to go “fuck!” I just swam. For my life…and my pride.   And then I met my destiny.

I could have been a trench soldier in World War I, waiting for that shrill whistle to jump over the top, helpless but hopeful. I had nowhere to go but forward, my meaningless and proverbial “bayonet” just useless for what I would face.   A lot of thoughts cross your mind before you plunge into a vast ocean to meet a pod of humpback whales travelling towards you at 7 to 9 knots, and the first question is always, “Why?”.   At 250 metres and closing, whales look like submarines barrelling towards you, not torpedoes. They are definitely going to hit you!   I could have been all toasty and comfortable at home, sipping my coffee. Leading my same-old-same boring life. Swiping through Facebook. Checking emails.   Or I could be out there in the wild: no phone, no electrics, no swiping. No personal challenges. A complete detachment from living and earning.   Or I could push the envelope even wider and do something for myself, to tick that bucket list item, that sense of adventure that I gave up the moment I stopped being a kid.   I can almost hear the voices now: “Don’t jump in the puddle!”   Why?   “You’ll get dirty!”   So?   “I mean it!”   So do I!   “I’m serious!”   SPLASH!   Life is judged by experiences and only you can make them happen. In my book, when you crawl up to the “Pearly Gates” it’s a one-way ticket. Click, punch, “Next!”   I don’t want aimless chit-chat like, “Did you do this?” or “Did you do that?”  I’m a person of adventure. I want to shout, “Hell yeah! That and more!”   15 years working in the charter boat world and owning four companies has taught me an awful lot about charter boats. And that is why I searched out one company in particular for my whale de-virgination: Kings Ningaloo.

If you’re not in the boating game, then the words “Brother Bill” mean nothing to you, but if you are, then they mean everything. Most skippers revere him. But the one thing I like about Kings Ningaloo is the “total experience”. Boat, food, humour, people. And I definitely like his marine biologists. (Shut up, Bill!). And this is why.   I tried every avoidance tactic to not get in the water. I thought my excuses would work. To say I was tired, or sick. But they all ganged up on me, and my pathetic excuses were crushed with a “Bullshit! Shut up! Suit up! Now! In the water!”   They were like my old sergeants, as a cadet. Only better looking.   I wanted to kill you then Zoe, Jess and Sacha. But you made me step out of my comfort zone and I felt so safe and secure to be led by you. Thank you. I would never, ever, have done a humpback swim without you.   When we plopped in the water, I just swam like a tagged Nemo on a sashimi menu. I followed the frantic kickings, preying no one was ever above me, drizzling my back with soy sauce and dollops of wasabi! 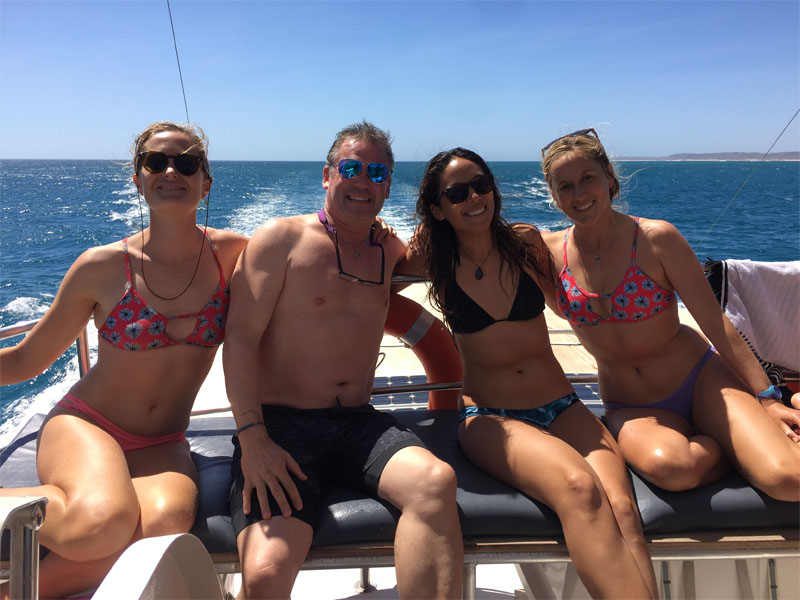 Swimming with humpback whales is completely unnerving and life-changing. When you launch into the great, bubbly yonder, you are no longer a human and master of the world. You become a guest in their environment. Vulnerable. Blind. They rule the roost, not you. You are the weakest link. You are part of the food chain, not the producer of it.   Diving with humpback whales is also a game of tactics for the skipper. Laws of probability. Calculation. If “x” whale(s) are travelling south, at “y” speed, and I am “z” distance in front of them, will my clients “a” see a whale, or “b” have then dive below them.   On our trip, I’d say the whales chose “b” about 40% of the time.   The skipper is key to success. He is the ultimate reason why you have an encounter with a humpback whale.   I’ve known Bill for a very long time and he just reads the water and animals like they are his best mates. He talks to me like he knows them. He can judge a bump or swell or ripple. I don’t know how. I really don’t. But he knows. He really does.   Bill hates negativity. If you come on the boat with one negative thought, he doesn’t want you there. “The whales know it,” he says.   I have to believe him now.   “The whales aren’t going to hit you,” he chides. “They’re too smart. They know where you are!”   A few times in my life I have faced something outside of my comfort zone: this was one of them. When the horn blared and the call to “Go!” sounded, yes, I followed everyone, but we all swam with purpose; a chance meeting with the leviathan of the ocean. I swam like a man on a mission. I was scared. But then something happened.   The ocean was no longer my fear but my friend. I was in it and with it. Deep and dark blues, glinting rays and firing shards of light.   I suddenly realised that I’d left my fears on the boat. I was among friends. The water was warm.   And just when I thought it couldn’t get any better, when everyone was searching in the shallower, deep blue waters, missing everything, I had this stupid idea to duck-dive deep. I had this feeling that something was going to pass below me. 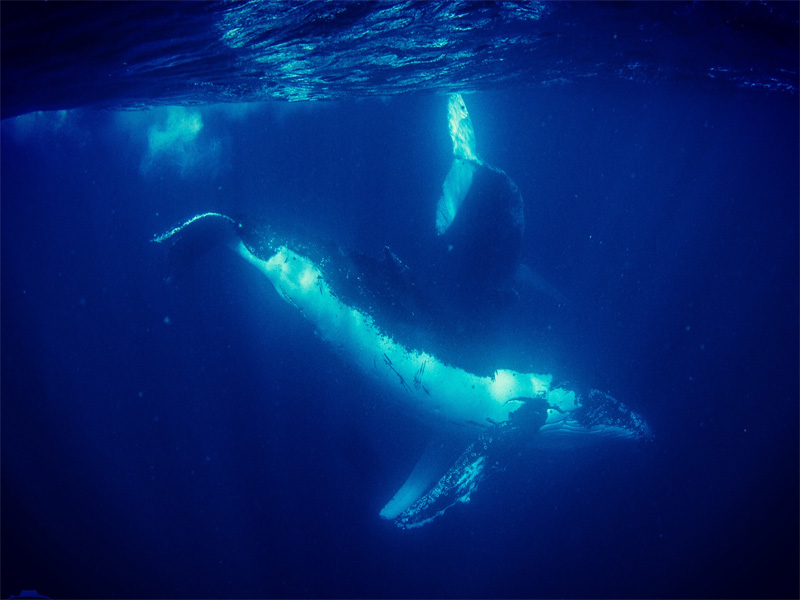